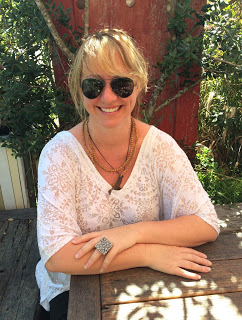 “We were all set up in Sydney,” says Kylie Bridges, shaking her head in slight disbelief at what she’s about to say.

“I really didn’t think he’d walk away from it all, but he did and we’re here and we love it”, she says, referring to her husband, Mark, a self-employed bathroom renovator and musician, and their decision to move to Clunes 13 years ago.

“I still actually go ‘wow, we really did it’, because we were in a really nice situation, in a little house, great friends, great street”, Kylie explains. A chance encounter between their son Josh, a toddler at the time, and a stranger’s playful dog on a Byron Bay beach changed their lives. The dog’s owner told them how he’d lived all over the world but had now settled in Clunes. “‘It was God’s country’, he said, and he told us to ‘do yourselves a favour and just go out into the hinterland while you’re up here’”, Kylie recounts. She never did learn his name.

Now primarily a self-employed graphic designer, artist, and mother, Kylie draws on the skills picked up throughout a varied career which has encompassed administration, retail management, call centre work, customer service and hospitality.

Completing a visual arts degree straight after school, her artistic side has been a constant anchor. “I’ve always done something creative, just whatever I could find”, Kylie says. This year Kylie’s daughter, Elke, the youngest of her four children, is starting school at Clunes Primary, following in the footsteps of her three older brothers, Josh, Toby and Ethan.

“It will be bittersweet”, Kylie says, of her child-minding days ending and her own pursuits coming to the fore.

“This is my year to bring it all together and see what it can be,” she says. “Now I need to work out for me and my career, I’m all grown up. Far out!”

The past two years have been challenging and enlightening, as Kylie has ventured into the world of hospitality together with her business partner and friend, Emma Nichols. Looking for a way to combine their shared love of art, exhibiting, food and coffee, they took over the Eltham Valley Pantry in 2013 after it was marked for closure. Emma, being a talented cook, and Kylie, being passionate about collaborating and exhibiting with fellow artists, desired to create an art workshop, gallery and coffee house.

“We knew it would be hard but it was so much more than we thought”, Kylie confides.  The pair discovered it wasn’t easy to put their own mark on a space with such a solid, existing reputation, and make it their own. But by the time they decided to move on, Kylie and Emma were able to pinpoint the direction in which their partnership should go next. “Through that process we realised it’s not what we wanted. That’s how Found came to be”, Kylie says.

Found Coffee and Creative was the pair’s second foray into hospitality. A café and a place to exhibit, produce and talk about creative projects in the centre of Lismore, it was a wonderful, if short-lived, venture. While the timing and the building weren’t meant to be, Kylie is proud of what they started there, and the connections they made have continued to bear fruit.

Energised by the idea of connecting with and encouraging fellow creatives, Kylie and Emma have now begun to focus on curating pop-up artisan markets, such as the one held in Bexhill last November. It’s an ideal way to foster a community of talented people and give them access to the public in an encouraging environment.

Collaboration is an essential part of Kylie’s work, both in business and in art.

“I really get inspired seeing other people’s talents and creativity. With the portraits that we do, obviously it’s going to have my influence, my style, but I like to know what their scenario is, what their surroundings are.”

Recently, a client was so moved he burst into tears when Kylie unveiled a portrait she’d done of his two sons. “It’s trying to find those stories to put in there, that’s what I really love to do. It’s the challenging thing but the most rewarding part of it.”