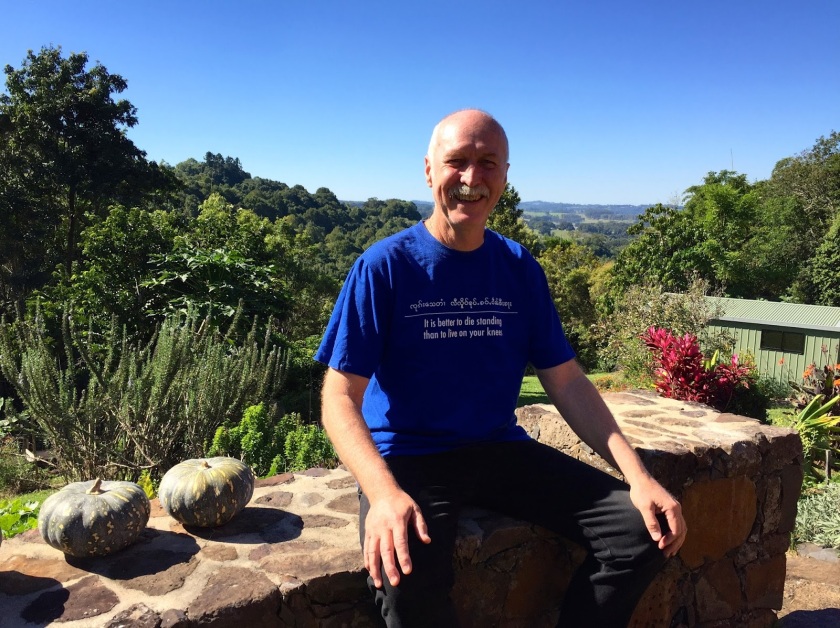 The son of a dairy farmer from McKees Hill, Jim Richardson started his education at a one-teacher school at Clovass. Since those early years, he has been fortunate enough to take advantage of the educational opportunities that came his way. They eventually led him out of rural New South Wales, to the city, and the wide world.

Fast forward to the 1970s, and Jim was a scholarship student at university in Armidale. Originally aiming to become a marine biologist, Jim realised he wanted to be involved with education, so decided to become a science teacher instead.

During university, Jim had been to the Nimbin Aquarius Festival in 1973, and it made an impression on him that would shape both his professional career and his environmental outlook.

“I was right into this concept of needing to educate yourself and to free up education, do whatever courses you can as long as they don’t cost too much money”, says Jim.

Contracted to take up a teaching post after graduating, Jim ended up in Bathurst, where he taught for 3 years before having saved enough money to embark on a year-long backpacking adventure. The plan was to go overland from Singapore all the way to Europe, but he got stopped at the border to Afghanistan. “It was 1978, the border was opening, it was closing, it was so hot, 40 degrees in the night time”, Jim recalls. “So we just flew to Greece!”

Back from his travels, Jim jumped at the chance to take a short course in teacher librarianship in Sydney. This fully funded course added another string to his bow and from then he went on to work as a teacher librarian in schools in Sydney and later Casino.

“Most North Coast people want to come back to the North Coast ‘cause we know how good it is”, says Jim of his appointment to Casino High School. It meant he could be closer to his family and also start to fulfil some of his environmental goals. “Since the Aquarius Festival I’d had the idea that it would be really good to get some land and grow some food.” Jim and his partner, Vicki Ross, and their young son, Sam, had a property at Jiggi where they grew coffee and had begun some reforestation.

When Jim got a transfer to Byron Bay High School, the family needed to move east. “Eventually we found this paddock here and thought ‘this is ok’, and we didn’t realise just how ok it was”, says Jim of their 2.4 hectare property in Clunes. Over time it has been regenerated with flourishing vegetable gardens, fruit trees, bamboo pockets and a cabinet timber plantation which Jim hopes to keep intact as carbon storage.

Jim’s work on the property reflects his love for environmental diversity, and draws on botany and plant ecology knowledge he gained while at university. “I could go all hippy and say, ‘heal the land’, he laughs. “I don’t ever use those terms, I always see it more as restoring a little bit back to the way it was.”

Since retiring from teaching in 2012, Jim has been using his library and computing knowledge in volunteer work among the Burmese refugee community in northern Thailand.

“As I got towards retirement age I started taking some long service leave and I thought ‘it’s time to put some stuff back in instead of just going and consuming the culture’”, he says. Jim had travelled through South East Asia and was interested in the politics and the diverse ethnic groups in the area. Working with the Burma Study Centre, a non-profit organisation in Chiang Mai, Jim has helped create online library services and provide education and training to migrants.

Jim is passionate about community engagement, including being active on council-based initiatives and community planning panels. Councils like to formalise community activism through panels and committees encouraging people to do things for each other, but Jim says that in reality, residents in small communities are already highly engaged.

“They don’t need council encouragement”, he says. “What we want is council to help us do it, to fund it. Somewhere in between there is a meeting point, if we can get a bit of both happening, that’s good.”