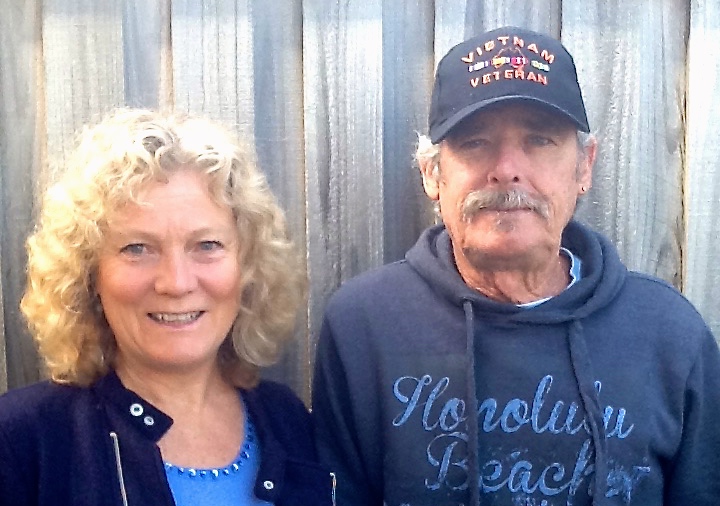 When Gary and Pam Lovell first came to Clunes in 1978, Bangalow Road was still a stock route for farmers taking their cattle to the dipping yards. “Old Billy Noble used to drove 100 head of cattle down there with his dogs, and no-one blinked an eye,” Gary says.

“He was nine years older than me. Still is,” Pam teases. “Funny that!” replies Gary. “I was a… what do you call ‘em? Cradle snatcher? But we’re still here.” They both chuckle.

Gary knew the area from visiting on surfing trips with a mate from Sydney. “One thing led to another and Pam said she was going to do teachers college and I said, ‘well there’s a good one up the Northern Rivers.’

After finishing her studies Pam taught in Kempsey for a few years before returning to Clunes and retraining as an Indonesian teacher. She has just finished at Eltham Public School after 27 years there, and still teaches and runs the library one day a week at Clunes Public School.

Gary found work as a manager on macadamia farms, when the local industry was just in its infancy. “I probably planted a hundred thousand of them, and grafted them. It was quite interesting, especially getting a new fledgling thing off the ground,” he says.

Gary and Pam raised their two boys, Clancy and Jackson, on their property on Booyong Road, where they brought together various bits of local history to make their home. They were living in an annex until they bought the first building, the old pay office from the Byron Bay Norco factory. That building became their shed and music room a year later when they bought the old Newrybar School residence, and moved it onto the property under police escort during a flood. The Booyong bridge was the trickiest part of the journey.

“We had to get crowbars on each side and actually push the bridge so we could get the house through there. It was pretty exciting times,” smiles Gary.

Both sons attended primary school in Clunes, and the Lovells became involved with the P & C and also with fundraising to enable the community to maintain control of the old school buildings after the new school opened. “If we didn’t do something about it, they were just going to take it away and put houses and everything there. It seemed like too good a thing for the community,” Gary says.

Gary enjoyed being part of the many musicals and plays that were staged during that time. “We’d do them Friday and Saturday night and both nights were just chock-a-block full,” he remembers. “I don’t know if it was really good, high quality drama, but it was even better when they forgot their lines,” laughs Pam. Talking over each other, laughing at the silly things, it’s clear these are fond memories.

They played tennis at Clunes, and Gary joined the fire brigade. Gary’s musical and organisational talent was also put to good use with the Christmas carols, which he ran for about 20 years.  Initially held in the park opposite the store, the event gradually grew to attract large crowds over the years. “We had fireworks, it was really amazing, it was really big,” says Gary. “Oh, that’s right, we had the burning bush one year!” exclaims Pam. “Well, the fire brigade was there, so it was alright,” Gary says calmly.

The Lovells have recently sold their 22 acres on Booyong Road, and are living at Skennars Head while they build a new home at Ewingsdale. They’re getting older, and the farm was a lot of work, but they’re also keen to spend more time on their other interests. For Gary, those are surfing, lapidary, and playing music with the Wilson Cooper Band. He admits it will be a struggle, though, to leave their close knit community, just as they were finally starting to feel like locals.

“We’ll miss the place, but it’s not as though we’ve moved to Whoop Whoop or anything,” he says.

One legacy that will remain is the war memorial in the park opposite the general store. One day many years ago, Gary was asked why Clunes didn’t have an Anzac day service. Gary, a Vietnam veteran, replied, “well, I dunno?” and he set about arranging one.

The next step was a permanent memorial, which Gary helped organise, with funds from local individuals and businesses.  “Within about a month we had thousands of dollars raised,” says Gary. Being asked to unveil the memorial was a humbling moment, and he’s proud of what he’s helped achieve. “I’ve done all this other stuff, but this is something that’s going to be there for a long time, hopefully.”

Gary and Pam have loved raising their family in Clunes. “Clunes has been really good to us, and the people accepted us,” Gary says. “Everyone keeps saying ‘are you gonna keep coming back and doing the carols and doing the services?’ Well, I don’t know. Can’t I pass it onto someone?”