Prize-winning painter, Vlad Kolas, is moving about his studio, brush in hand, music blaring, when I appear at the door one hot afternoon. Startled, he turns and jumps off the ground and walks over, wiping his hands with a rag.

Music is a crucial element to Vlad’s artistic practice, giving him energy and inspiration. Today, as with other days, Led Zeppelin and David Bowie are on high rotation.

“You know how you dance when no-one’s looking? I’m doing that with the paintbrush. Then you stand back and assess what you did, and make some adjustments. It’s a balance between those critical decisions and the intuition,” he says.

Vlad’s white-walled studio is a relatively new addition on his Clunes property, where he lives with his partner, Jessica, and their four boys aged from 3 to 15. There’s not a clean surface in sight, with couches and office chairs spattered with paint, and entire tables serving as mixing palettes, covered in oils blended together in endless colour combinations.

Growing up in Bondi Beach, Vlad loved surfing and music, and tried his hand at carpentry before he realised it wasn’t going to deliver him the creative and career freedom he desired.

It was Jessica, a glass artist also originally from Sydney, who recognised Vlad’s talent and prompted him to study art instead. Vlad’s mother and grandfather were both artists, and he’d absorbed much of their skills and knowledge, but hadn’t paid it too much attention.

“Visually being around it from a young age, it gets ingrained in your head, you don’t even realise it,” he says.

Vlad spent two years at the National Art School in Sydney, learning a lot about drawing, before moving to Lismore to continue his studies at Southern Cross University, where he majored in oils and painting. “It was a bit more self-directed, which is good for me, because I already had the drawing under my belt,” he says.

In 2012, Vlad won the Northern Rivers Portrait Prize with a self-portrait, after hardly painting at all in the preceding years.

“That was the first drawing I actually did for ages. I was into abstraction, but I thought, I’ll draw and paint, and people liked it.” 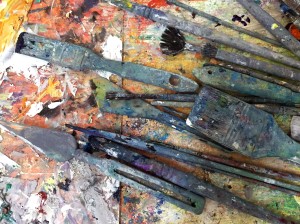 Prior to that, Vlad had been trying to find his own style, trying to make something different to what had been done before.

“I thought, everything’s been explored in art, and I didn’t want to place myself in the past. Now I realise no one’s going to draw like you or paint like you. You just do what you can do.”

Vlad’s semi-abstract style is inspired by his mother and grandfather’s portraiture and figurative work, as well as expressionists and abstract artists such as Willem De Kooning.

“For me it’s about drawing and then the movement of paint. There’s a design and a pattern; it becomes a jigsaw puzzle that you have to solve,” he says. “It self-directs in some ways, you’ve got to figure out how to finish it, and what works.”

Sometimes Vlad will instinctively know when a painting is finished, but other times they can be more difficult to read. A work hung in a different light will reveal issues he hadn’t noticed before. “I read that Margaret Olley used to take paintbrushes to her exhibition and change something after it’d been hung. I totally know that feeling,” he nods.

Vlad’s adding the final touches to a portrait of a cow, and he has others hanging in Barebones Art Space in Bangalow. He loves the features and personalities that come through in portrait painting, whether it’s animals or people.

“It shouldn’t matter what you paint really, it’s how you paint it. You should be able to paint a tin can and make it a picture.